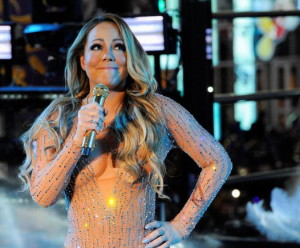 Did you hear the one about how powerful Mariah Carey’s voice is? You can hear her sing even when her mouth is not open. As you can imagine, there is no shortage of jokes about the singer’s epic fail on New Year’s Eve. Several have no doubt graced your Facebook or Twitter feed, you’ve seen the memes, watched the late-night show snippets, and probably discussed it with your friends and colleagues. How could it have happened, you might ask? Here’s the question I would prefer be asked of presentation professionals?

What should you do when it happens to you?

Let’s clean up the facts just a bit before we begin, because while I believe that Carey is deserving of plenty of criticism, I want to make sure that it is fair. First off, she did not get caught lip-syncing. Lip-syncing is like playing air guitar: you go through the motions while the sound is produced elsewhere. Most live performances, especially in difficult environments, include a vocal track, over which the singer sings. That is what Carey was intending to do, but when her in-ear monitor went out, she lost her composure. The second fact, for whatever it is worth, is that she and her team warned the producers and stage managers of the balky transmitter pack well ahead of time and they evidently did nothing. The third thing to keep in mind is what a crazy and dynamic environment Times Square must have been. This would have been challenging for even the most consummate of professionals.

It’s easy to wonder why she couldn’t just sing the song without the benefit of her in-ear monitor? Shouldn’t a professional be able to do that? After all, it was her song! We can debate how demanding the environment was and speculate on whether she could hear the music at all, but that misses the point and brings us to the criticism of Carey that is most relevant to the presentation community: her image as a professional. You see, Mariah Carey is perfect. Her wardrobe is always perfect. Her hair impeccably coiffed. Her choreography painstakingly staged. Her background vocals exquisitely integrated. I recall when she was a judge on American Idol, most camera cuts to the judges table caught her fiddling with her hair. Everything about Mariah Carey’s on-stage persona is about being perfect.

And that’s the problem. What do you do when you are supposed to be perfect but circumstances out of your control prevent it? What do you fall back on? There are no degrees of perfection–either you are perfect or you’re flawed. And that’s a really tough place to be as a performer, because of three axioms of our profession, which hold up across all of public performance:

From this perspective, Carey was doomed from the very beginning. If your whole thing is perfection, what does that say about your ability to roll with punches? And unless you really are perfect in real life, does that stage persona evoke feelings of authenticity. No, this was a technical problem for which Mariah Carey was uniquely ill-equipped to handle.

Here is a continuum of possible responses to the situation:

Why would anyone pay the outrageous sums of a live concert? I would tell you it is for the chance at No. 5 moments. As I think about my own concert experiences, the ones that are indelible are when unexpected things happened. Like when Paul McCartney started a song by singing the wrong lyrics, made his band stop, and then wondering if he had just happened upon something cool, a capellad his way through the mashed-up arrangement for a few bars. We ate it up. Or the time when Mick Jagger ran the length of the Candlestick Park outfield in the middle of Satisfaction, and Keith Richards dared him to not sing out of breath. They both cracked up and we ate it up. Or the time when the conductor of the San Jose Symphony Orchestra invited a seven-year-old boy from the audience to take over for him, making his musicians promise that they would try to keep time according to his direction. The pace became so fast that they could not keep up. And we ate it up.

Mariah Carey did not get past No. 1 and she made it worse in the following days when, instead of letting the whole thing blow over, her team defended her, lashed out at Dick Clark Productions (isn’t that a bit like blaming God?), and went so far as to suggest self-fornication to the producers for refusing to pull the performance from the West Coast telecast, destined to air three hours after the incident.

Let’s compare two singers. Let’s compare Mariah Carey’s response to New Year’s Eve with how Adele handled a complete sound failure during a 2016 performance. While Carey had a vocal track and complete accompaniment behind her (even if it was noisy), Adele found herself with no accompaniment at all.

Why is Adele so popular? By her own admission, she misses notes all the time. And her range is just average. Is it incredible songwriting? Perhaps, but that is rarely the basis of the praise she earns. And her wardrobes are nothing like Mariah’s; they’re usually semi-frumpy dresses with sequins. And that’s just it: Adele is real. She can do something that less than 1% of the population can and for it she earns obscene amounts of money, but she gives her audiences the powerful impression that she is just like them. Watch the clip to the end and listen to how she schmoozes them about the moment they had. I’ll issue a modest profanity alert, but you know what, that actually makes her even more real.

Thanks to Mariah Carey, our industry has a perfectly gift-wrapped new year resolution. Do not practice your polish, do not work on your image, and do not try to be the best dresser you know. Your audiences do not care about those things. Instead, ask yourself who you truly are and whether your audiences could recognize your most genuine qualities and characteristics. Ask yourself how you can manage all of the demands of a public presenter — the technology, the slides, audience expectation, and your own nerves — and reach a place where you are showing the room your most authentic self.

Above all, your authenticity puts you in a position to be the very best storyteller you can be, and that is your No. 1 aim.

In addition, finding your real self gets your audiences to a place where they can root for you, where they might be endeared by you. And it gets you to a place where you can confidently deal with the most unexpected circumstances of all. Stuff happens to everyone so it’s no big deal if it also happens to you.

Mariah Carey has not shown herself to be capable of finding that quality within herself. Here’s hoping that you can.

9 thoughts on “When Your Mariah Moment Happens”