When you have held annual conferences as long as I have (first one in 1989), you encounter just about everything along the way. We have witnessed all of the following:

None of those experiences prepared me for Sep 27-30 in New Orleans, alternatingly sad and lovely, heavy and light, joyous and tearful.

I typically head out to the conference site a week early, three days ahead of the rest of the conference staff and five days in advance of the first arrivals of our patrons. I discovered long ago that the best way to prepare for 200 people paying attention to you 24 x 7 is to spend a few days in complete solitude. In that time, I prepare all of the remarks and seminars that I personally deliver, I correspond daily with the patrons, and I take care of various mindless tasks like printing badges and check-in lists. Again, all good prep for the tidal wave of adrenaline that is about to course through my body for five consecutive days. 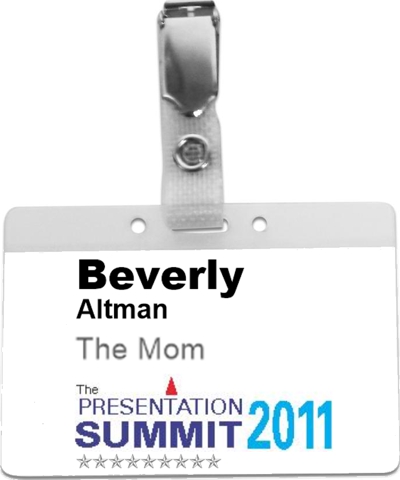 Not this time. My flight from California touched down Monday evening in New Orleans and my phone launched into a frenzy of simultaneous voice and text messages. My mother had suffered a major stroke. Not just my mother, but the face of the conference: she ran conference registration for over a decade and everyone referred to her as “Mom” or “The Mom.” She wasn’t just my mom; she was everyone’s mom.

I wandered the airport, aimless and unable to think. It was after 9:00p and there were no flights back to California that night, so I found the Hilton across the street from the terminal, slept for two hours, and was on a 4:00a flight back home.

Beverly Altman passed away while I was on that flight.

She went without pain, and despite approaching her 90th birthday, she suffered no decline at all. In fact, she was winning a bridge tournament when she was felled by her stroke.

Her timing was either horrific or perfect or both, and with two weeks of perspective, I’m still not sure which. When I should have been preparing for a conference in New Orleans, I was preparing for a funeral in California, and that presented the first of several impossible questions that demanded answers:

I typically send daily emails to all attendees the week prior, to help them prepare for their travel, to give them an idea of our surroundings, and to generally get them enthusiastic about the event. If I were to choose just two guiding principles of the Presentation Summit, I would go with these: 1) We seek the highest form of authenticity in communication; and 2) We create community among presentation professionals.

Those two principles were hopelessly at odds, as I chose to conduct business as usual during prep week: while picking out caskets and preparing for a eulogy, I also continued with daily emails to the patrons. I described the hotel that I had not yet set foot in, gave a virtual walking tour of Bourbon Street, and when one woman asked me about the weather, I called a local contact so that I could provide her with an answer. With my two conference mantras in utter conflict, I chose to commit deception in the name of community. I might never know if I did the right thing; the only thing I knew for sure was that I wasn’t going to tell people that my mom died in an email.

It was now Saturday and Becky and I were on a 5:00a flight back to New Orleans. The only people that knew the situation were head of Ops Sheila and a few other team members who arrived Thu and Fri. But by the time I arrived at the hotel that afternoon, we were encountering our conference patrons, and soon we would be hosting an evening happy hour for 50 or 60 of them.

What is the right time and the right way to tell 220 conference patrons that you just lost your mother? Under normal circumstances, one of the possible answers would be to say nothing at all, but this situation was far from normal. With as many as 100 of them having enjoyed their own relationship with her, they needed to know. And soon I would be vulnerable to the inevitable, seemingly innocent, and oh-so-torturous “Hey, how’s your mom?” queries.

If I do it right away, I risk casting a pall over the entire four days. If I wait until the end, I deprive people of their own opportunity to process, offer condolence, and even grieve. And once again, 60% of the crowd were first-timers who had never known my mother, much less had any relationship with her. How do I just dump this on them?

So adrift in this, I actually conducted Google searches in the hopes of finding others who had experienced something like this before me, but I seemed to be alone on this island. And while I initially settled on making an announcement the morning of Day Three, I reconsidered the moment I arrived on site. By Sunday morning, about a dozen people had heard the news and to stick them with a gag order until Wednesday would be unfair. More important, the pressure on me was becoming suffocating. How could I function with that bombshell inside of me? How could I promote authenticity in public discourse and conceal such personally-impactful news? Sending out a few emails that everything is hunky-dory is one thing; deceiving an entire conference crowd in person would be the height of hypocrisy.

It soon became completely obvious that the only possible course of action was to tell people right away: at the Sunday evening welcome reception. And while making that decision was like lifting an anvil off of my shoulders, now I had to prepare for the specter of actually doing it, and that presented a whole new set of questions: What do I say? How do I make it relevant to the first-timers who never met her? And how do I bring the mood back up in time to introduce Shawn Villaron from Microsoft, the company that paid good money to act as the sponsor of the reception? (Hi everyone, my mom died. Now please welcome Shawn…)

It was gratifying to discover that I could rely on some of the same principles that I advocate to my clients during presentation skills training:

If you have bad news to deliver, don’t bury it
Ladies and gentlemen, the conference lost a beloved member of its family. My mother Beverly passed away Tuesday morning.

Provide context
From 1989 to 2012, she took up permanent residence at our Registration desk and was the first person to greet you. Her badge simply read “The Mom,” and she was full of smiles for first-time attendees and hugs for our veterans.

Offer meaningful perspective
The Jewish word to describe Mom’s qualities is “ruach” — it means energy, vitality, and zest for life. She was full of ruach, right up to her final moments. (P.S. I do not normally advocate invoking one’s faith in public communication, but it felt appropriate in this case.)

Finish by lightening the mood
If you are going to deliver a eulogy at a presentations conference, you should prepare a chart! 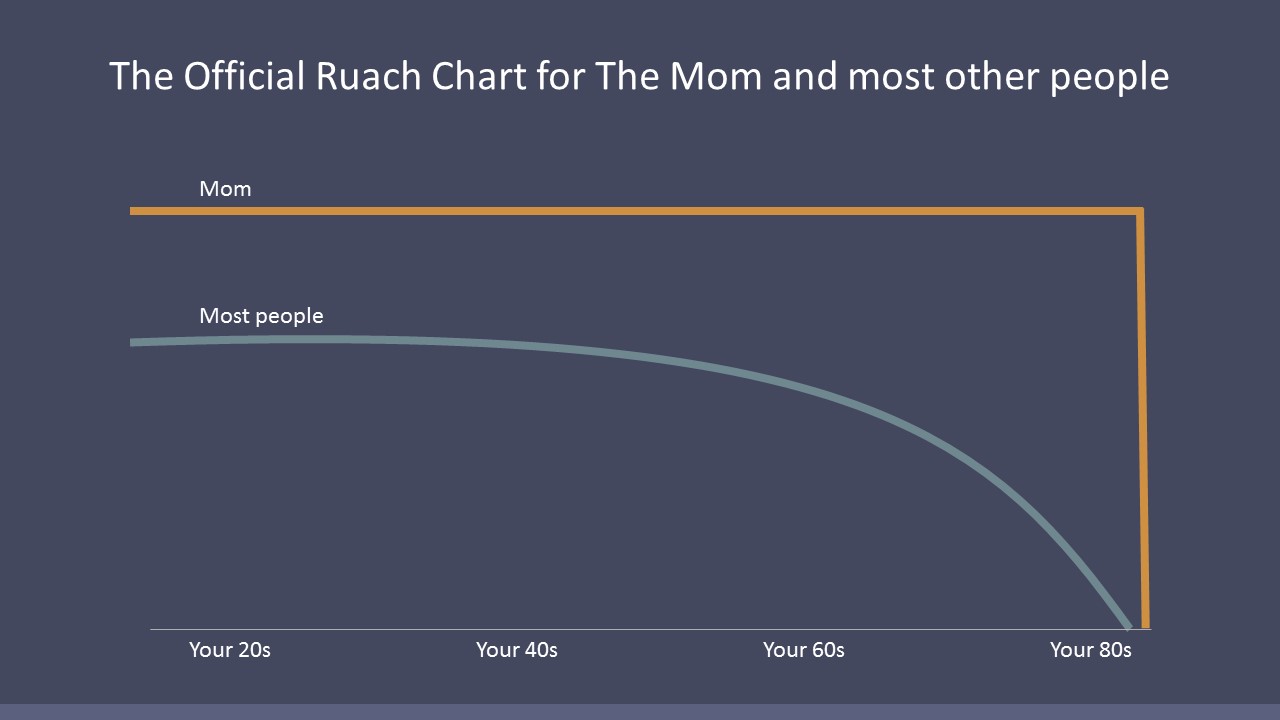 Finally, try to provide meaning for a general audience
I realize that most of you are attending this conference for the first time and did not meet my mom. I consider it a blessing that you will have the opportunity across the next three days to get a sense of what this conference meant to her and what she meant to the conference.

My belief in the power of in-person encounters has guided my career arc. While webinars are useful tools and social media outlets help connect people, there is just no substitute for meeting people face to face. I have pretty much staked my livelihood on that premise with a 13-year investment in an annual conference and a commitment to meeting clients in person whenever possible.

As you can imagine, I received lots of condolences across the week, not to mention numerous queries along the lines of “how are you even standing up right now?” Frankly, it was easy. I have written and spoken many times about the almost-magical qualities of the folks who attend the Presentation Summit. How they come together to create a community that is extraordinary for a business conference. How they create collective grace and humility.

The 220 people who attended the Summit this year were a source of tremendous strength and healing. They were Mom’s second family, so how could they not be?

Finally, as the conference lost its mom, it might be gaining its first-ever conference baby. Stephen Kuhnert, representing Made in Office, one of our platinum sponsors, was intending to fly home to Germany with his expectant wife. When her water broke eight weeks early, they found themselves with an extended stay in New Orleans. At the time of this writing, the parents to be were resting comfortably and waiting patiently for nature to take its course. We’ll keep everyone posted on this wonderful completion of the circle of life. (In fact, here is the update: the circle of life has been completed!)