Modern journalism is replete with examples of misused and overhyped ajdectives, so I want to make it clear that I thought long and hard about the ones I am about to offer to sum up my thoughts about the new version of PowerPoint. Version 2016 of PowerPoint is wonderfully exciting in its promise for better work, and at the same time, maddeningly exasperating in its refusal to eliminate tedious work. We’ll take these adjectives in order.

The Power of Morph

The biggest news in version 2016 is the addition of the Morph transition. Keynote users will see this as PowerPoint’s response to Magic Move; PowerPoint users might see it as the answer to their longtime pleas for more control over objects in motion. With Morph, you can build animations just by creating two versions of objects on adjacent slides and telling the software to figure it out. Here is how this new function works:

PowerPoint will create the animation for you. So if you want a circle to turn from black to blue, it might be easier to use the Morph transition between two slides than to wrestle with the Fill Color emphasis. Special effects text that needs to rotate and move will probably be easier performed with Morph than with the pair of conventional animations that would need to be created. If you want a large logo to move from the center of a title slide, down to the footer position, shrinking down as it goes, Morph can do it in half the time. And perhaps most important, if you need to move an object from one exact position to another exact position, Morph will appear in your dreams because the motion path animations have never offered coordinate control, requiring elaborate trial and error. Now you simply move the object to its exact resting position and animate the motion with Morph.

To use Morph on an object, you need to make a copy of it; that’s how PowerPoint knows what you want to morph from and to. So you essentially create a “from object” and then on the next slide a “to object.” This is not a true morphing tool — for instance, if you create a basic rectangle and then rotate its “to” version, Morph will handle this nicely. But if you change the “to” object to a trapezoid or if you change its basic shape by editing its points, Morph will not be able to figure this out. I had high hopes that I could use morph to turn the letter R into a B; perhaps in the next version.

These limitations aside, the tool carries high promise of being a big time-saver. The short video below is a bit juvenile but is significant in that it took me barely 10 minutes to create.

Each object created on the sunny slide has a corresponding object on the sunset slide with basic tweaks made to its position, color, or visibility. Creating this simple effect with animation would have taken longer and been much more tedious as I would have had to wrestle with multiple overlapping objects and various motion paths.

Finally, PowerPoint can now much more easily create realistic Prezi-like zooms. Here’s hoping that our community doesn’t get drunk with that.

Is it possible for an algorithm to create well-designed PowerPoint slides? Can a software program design better slides than you or I could? Microsoft is banking on yes to these questions with the debut of Designer, a cloud-based reservoir of designs, each of which is ready to be integrated with existing templates on your command.

I found the results ranging from proficient to deficient. In some cases, PowerPoint’s new Design Ideas task pane did not hesitate to offer suggestions, even when there was no design motif at all. In fact, I found some of the best ideas came from slides that used the standard and unadorned template.

The photo sequence below shows the simple nature of Designer: You import a photo, invoke the Design Ideas task pane, and after rummaging through its database of designs, if Designer thinks that it can offer up a nice design, it makes it available for download. 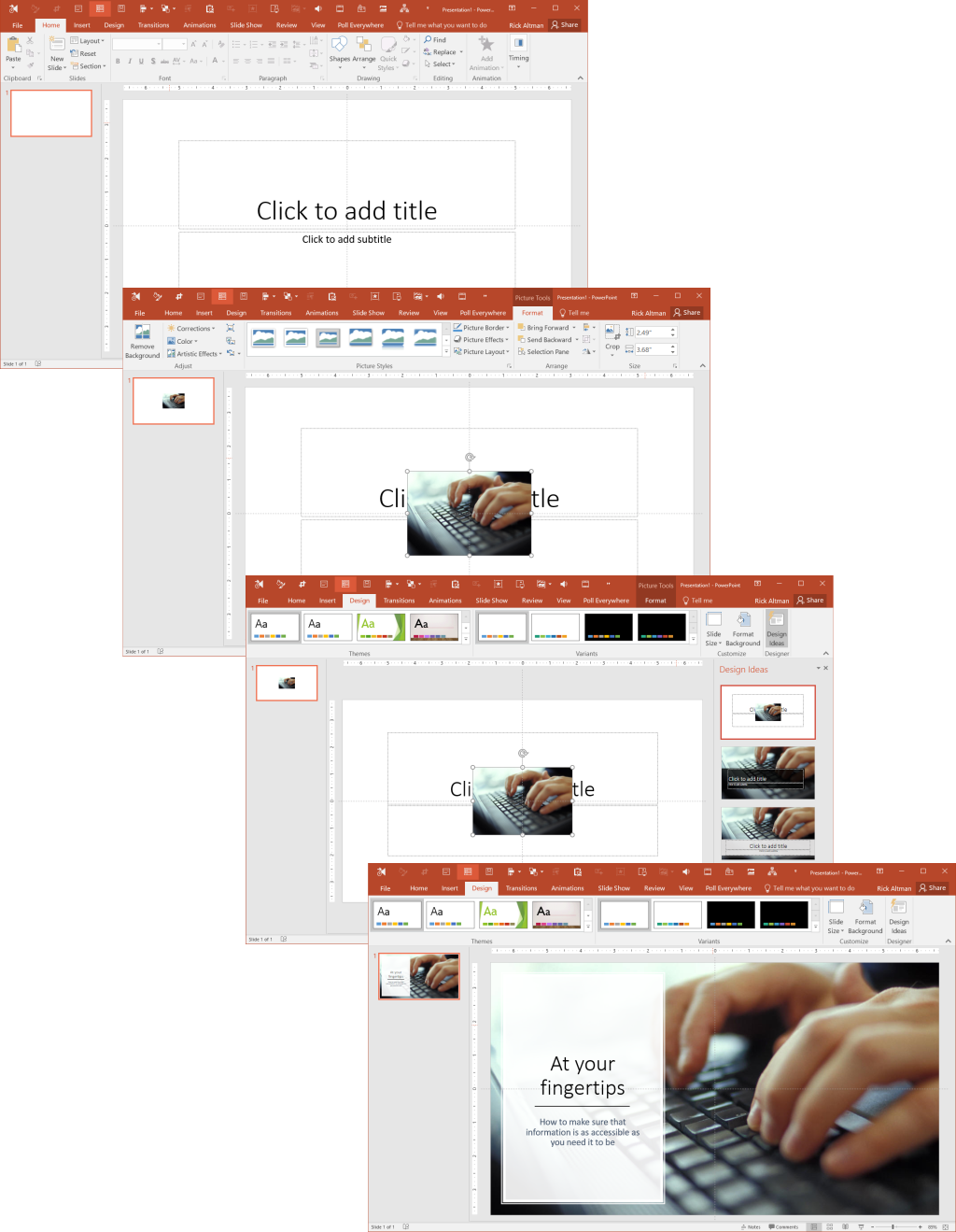 In this sequence, dropping this plain photo onto a title slide invokes several suggestions and choosing one of them produced this nice result. Designer doesn’t know what it is cutting off, so you’ll always need to be final arbiter. In this case, one of the suggested treatments placed a text box directly over the typing hands.

Importing this same photo onto a Title Only or a Blank slide produced no suggestions at all. About half the time did I find useful suggestions for Title and Content (i.e. main) slides. And more often than not, photos placed on Section Header layouts produced no results at all. That was surprising to me, as that layout seems like an optimal candidate to entertain suggestions for creative use. Microsoft has stated that the tool will evolve with use and will soon begin supporting more slide types.

So we consider this to be an interesting work in progress and we hope that it does not make lazy slide designers out of us. The results are often good enough to tempt users to click once on a suggested design and call it a day. We hope that doesn’t happen; we hope that you use Designer as a springboard for creativity and inspiration, as a starting point for a clean, coordinated, and integrated set of slides. The responsibility for that will be yours. Always.

Who Gets to Use These?

One of the more confounding aspects of these two new features is when they might actually show up on your interface. The first review copy that was made available to me by Microsoft’s PR team contained neither Morph nor Designer and that helps explain why there are several reviews of PowerPoint 2016 on the Web today that make no mention of either feature. I have been assured that every subscriber to Office 365 and every customer of Office 2016 will eventually have access to Morph and Designer.

If you did not completely understand that last sentence, you have company, as the relationship between Office 2016 and Office 365 is shrouded in confusion. Office 2016 is a software product while Office 365 is a subscription service. If you subscribe to Office 365, you are said to be in perpetual upgrade, with every patch, update, .1 release, or brand new version of Office being pushed out to you right away.

PowerPoint 2016 inherits from Excel several new chart types (“Box and Whisker,” anyone?), better collaboration with slide decks saved to the cloud, and an interesting “Tell me what you want to do” search bar, which is actually known as the Tell Me bar. I was cynical of this at first when I expected it to take the place of online Help. But when I just started using it for routine commands — type “italic” to change selected type to italic, “increase size” to increment text, “fill” to reach the Shape Fill dialog — it became a nice time-saver. It became even better when I discovered that I could invoke it with Alt+Q. And it will become better still when I can use my microphone to communicate directly with it without having to lift a finger.

No Rest for the Finger Weary

Now we get to the maddening part: for the third consecutive release, very little has been done to make the interface more approachable or functions more usable. In this regard PowerPoint lags way behind modern software, in some cases by over a decade. In addition, no action has been taken to address what I and several others who comment on the industry believe to be the No. 1 problem facing presentation content creators today: the use of slides both for visuals as well as for printed handouts.

I have written about this on multiple occasions and it is not a happy walk down memory lane. In February of 2012, I posted my PowerPoint Wish List, and in May of 2013, I published a lengthy review of PowerPoint 2013. (Both of these links will open in separate windows.) In these postings, I noted the following deficiencies with the software:

Nearly four years and two major software releases later, these five shortcomings have gone completely unaddressed. I don’t expect the PowerPoint development team to take on these issues just because I raise them, but I have had lots of company. If you set aside No. 1 above, which is philosophical and subject to some debate, the other four speak to tasks that regular users need to perform constantly but must make many extra clicks and mouse motions in order to do so. PowerPoint reigns as one of the most tedious programs to use because of these types of oversights, and the development team has been hearing about it for nearly a decade. I keep thinking that, one of these development cycles, Microsoft will try to bring some relief to those in the trenches who must click their mouses so many times to overcome the interface. Think about what we must do to apply a Fade to an object, set to take place automatically, and last for one second:

PowerPoint is uniquely unfriendly in this regard, showing no ability to remember your preferred settings, providing no way to set defaults, and offering poor or non-existent interaction between related interface settings. I am one of many who has pointed out these interface deficiencies for nearly a decade but the development team has barely made a public acknowledgment of them. In an age when carpal tunnel syndrome and trigger finger are responsible for so many lost hours in the workforce, PowerPoint has done nothing to reduce the number of mouse clicks required to perform the most perfunctory tasks.

Morph is a wonderful tool and Designer will help users develop instincts for better slide design. At some point, though, the PowerPoint development team has to realize that the greatest gift it can give to its user base is to enable them to do their work more efficiently, with fewer clicks and, with less risk to physical injury.