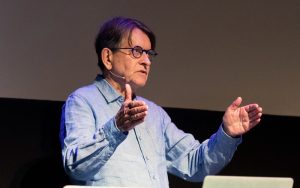 Internationally acclaimed designer, author, and theorist Nigel Holmes is set to make his fourth appearance at the Presentation Summit this fall, and there is every indication that his story will be as original as he is. Whether the Summit is able to be held in person or must go virtual again, Holmes will deliver one of its morning keynote addresses.

“I have been captivated by Nigel since long before Al Gore invented the Internet,” quips conference host Rick Altman, recalling the 1980s lecture he attended in which Holmes, then the Art Director for TIME magazine, compared dental hygiene across the planet with a chart whose Y values were expressed by the amount of toothpaste being squeezed out of tubes. “Not only was he wonderfully inventive, he couldn’t rely on clip art or stock photography to create the visual — we’re talking all hand-drawn. I have been a huge fan ever since.” 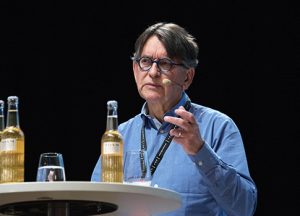 Altman’s hero worship has paid dividends for Summit audiences, who have been treated to the following vignettes from Holmes:

These moments illustrate the balance that Holmes has created between technology and the avoidance of same — a fence that he has deftly straddled his entire career. “I was excited to see that cave drawings just discovered in Indonesia set the earliest known human-drawn pictures to over 45,000 years ago. These are the earliest forms of representational art that we know of and I can formulate a direct connection between those artists and people using PowerPoint today.” 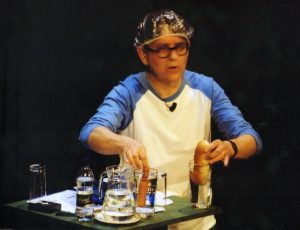 This is one of two hints at what Holmes might cover in 2021, the other being his assertion that “PowerPoint does not live in a vacuum. People’s everyday activities often profoundly impact how they present. So I’m interested in not only what you do, but what else you do. This can be tremendously insightful.”

Irrespective of age, Holmes never stops learning his craft. “I used to think that the only way to give a lecture was with a carousel of slides,” he recalls. “But when I made what was for me a bold leap to PowerPoint in 2003, my life changed. I wish I knew about the Summit back then. The people that the organizers invite to speak, and the audience that comes to listen are wonderful people, who inspire, and teach. Whatever I’m talking about doesn’t matter, I’m there to learn. And learning has never been so much fun as it is at the Presentation Summit.”

Nigel Holmes graduated from the Royal College of Art in London. Across decades of work as an independent artist, Holmes has been hired by BBC, Ford Motor Company, Apple, Nike, Sony, Fortune Magazine, VISA, and the Smithsonian Institute. In addition to his years at TIME, he has authored 10 books since 1984, his most recent being the 2020 work The Bigger Book of Everything: A Visual Guide to Travel and the World.

Near the top of his accomplishments, which he proudly wears as a badge of honor? “Edward Tufte regularly disparages my work.”

Nigel Holmes leads a team of designers, PowerPoint experts, and storytelling coaches into the Presentation Summit’s 19th season as the standard bearer of best practices for the industry. Now in the Covid era, this includes all of the requisite skills needed to command a virtual audience. If plausible by September, there will be limited in-person attendance available, as well as a virtual option from anywhere in the world. Patrons can register for either the in-person or virtual component and switch without consequence as conditions change.