Last week I had the good fortune of leading a webinar for the Training Magazine Network, a platform for, and I quote, “social learning and networking for the exchange of ideas and resources among global learning professionals and thought leaders.” TMN has a membership roster in excess of 150,000, so it was no surprise that nearly 1,000 people tuned in. It didn’t hurt that the title of my hour was “Awesome Makeovers from PowerPoint Slides that Suuuuuck.” Combining the words awesome, PowerPoint, and suuuuck, was described by the marketing team at TMN as the trifecta. Whether the makeovers actually were or were not awesome is a question you can answer for yourself by viewing the recording. 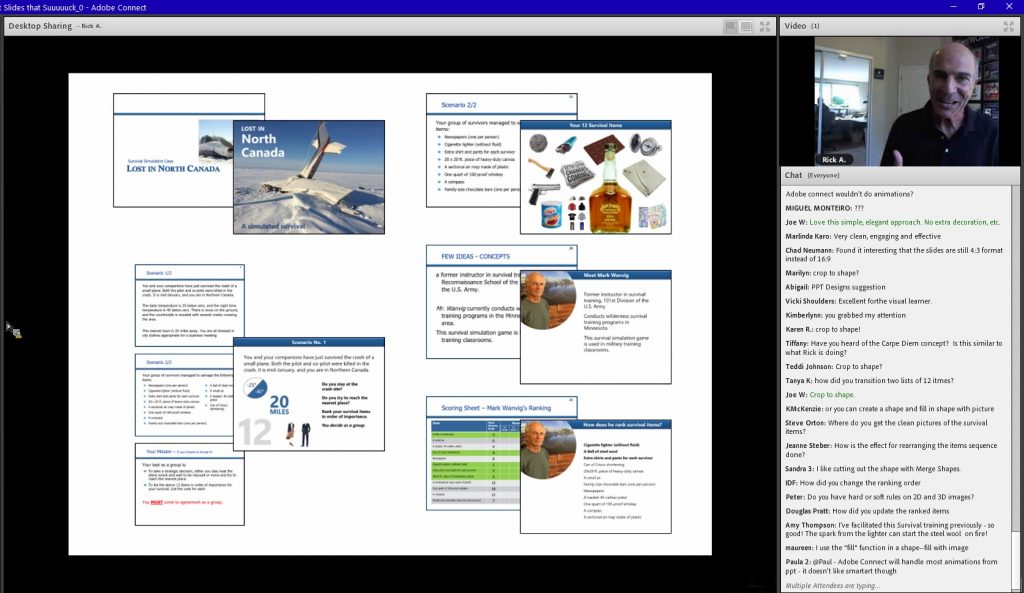 While it was certainly my aim to stimulate thought among my audience members, inspire them to think more critically about message crafting and presentation design, and show them a thing or two about PowerPoint, what struck me the most was what I learned from all of them. That starts with the most unabashed enthusiasm for learning that any audience of mine has ever shown. As is my standard practice with before-and-after themes, I solicit contributions from audience members ahead of time. Few things in life are more vital than culling material for a training session from the people who are actually attending the training. Yet most of the time, it is the proverbial pulling of teeth to get people to send slides to me. Normally, I’m lucky to get two or three, and I often have to comb the attendee rolls for names that I recognize and badger them to help out a friend.

Not this time. Not with this group. I received over a dozen fully-fleshed-out slide decks. It is rare that I have to issue apologies to people whose work I did not choose; this time, I was throwing down those apologies in almost gleeful remorse.

Here are a variety of other discoveries I made during these 75 minutes. The timing was perfect, as I will be leading another webinar on June 2, Hidden Gems in PowerPoint that Could Rock Your World, and feedback from this group will directly inform my content for June 2.

Morph and Zoom are not yet well known

While an overwhelming majority of PowerPoint users are using the Office 365 version, barely half have working-level comfort with the two marquee new features of Morph, the killer slide transition that can transform shapes, and Zoom, the hyperlinking tool on steroids.

Morph is a great tool for a makeover session, as I can transform poorly designed elements into better ones, literally right before the eyes of audience members. I also suggested uses for Morph as part of the actual after content, and every time I did either one of these things, the Chat panel blew up. “How did you make that photo move like that?” was one of dozens of similar queries.

I will no longer take for granted that everyone understands these exciting and newish tools.

Slide masters still haunt us all

This only surprises me in the degree to which this remains an issue with just about all PowerPoint users. I can count on one hand the people on this planet who are legitimate experts when it comes to the global formatting tool known as the slide master, and its sidekick, the slide layout. The same goes for color schemes, default typefaces, and the granddaddy of all stupefying elements, headers and footers.

Come June 2, I will attempt to shed the tiniest amount of light on PowerPoint’s tools of global formatting, but large books and all-day workshops struggle to provide illumination; I will surely just be tilting at a windmill.

Ninety-nine percent of PowerPoint users create linear slide decks 99% of the time, and present in a linear fashion 99% of the time. That is not likely to change, as we are linear beings and we live our lives that way. But the 1% of the time when you might need to leapfrog around within your slides, knowing the tools for doing that represents one of the great sea changes in PowerPoint technique. You can create hot buttons in PowerPoint that activate objects on a slide, jump you to slides far away from your current position, and even take you to other PowerPoint files altogether. Most users, I have concluded, do not know how to do this or they know how to do it but they don’t.

What brings these all together? A trivia contest

How wonderfully fitting that the discipline that crystallizes many of these capabilities is fun and games. A side conversation was started about how to administer quizzes remotely and several audience members asked about Kahoot and Aha Slides, two popular quiz engines that can lead remote games and quizzes. I chimed in that I prefer to just use PowerPoint for trivia contests and people reacted as if I was from another planet. “No really,” I said, I just use PowerPoint, and this year, with the Presentation Summit going virtual, we will hold our annual trivia contest over Zoom.”

When the session ended, I received no less than three dozen emails asking me if I would share my trivia contest slide deck. So now that will become one of my June 2 hidden gems.

Clearly, the biggest trick of all on that day will be how I cram about four hours of content into 60 minutes. Such is the voracious appetite that Training Magazine Network subscribers have for fresh PowerPoint content.

Would you like to attend Hidden Gems in PowerPoint that Could Rock Your World? This link is live, the webinar is free to Training Magazine Network members, and membership is free.