It was 9:15a and the outdoor thermometer registered it 37 degrees, 98 degrees in Fahrenheit. A group of over a dozen of us, including several teens and one 70-year-old woman, had already committed to hiking the fabled Snake Path to the summit of Israel’s Masada, and we were not going to deny ourselves the challenge.

The teenagers were giddy and care-free, but the grownups were silently intimidated — at least this grownup was. Clearly, this wasn’t going to be a social stroll, with chit-chat and photo opps framing the experience. We were about to endure nearly 1150 feet of elevation change and 2.5 miles of journey.

I lack the stamina of a distance runner and I dehydrate easily, so I knew that I had to put my head down, conserve both energy and focus, and find a pace that was sustainable. Too fast and I flame out; too slow and I’m in the sun for too long and I flame out. Everyone has a natural rhythm for facing challenges and it was imperative that we each find our own. 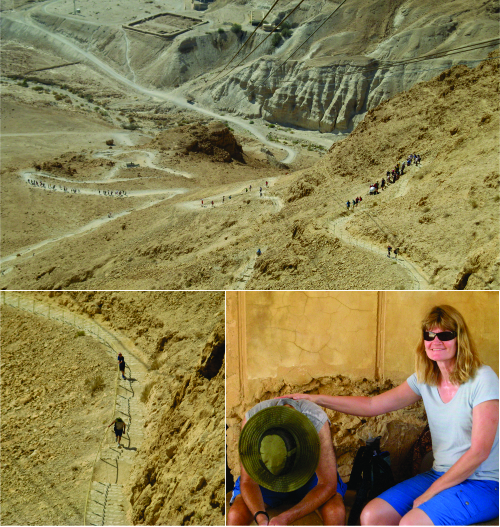 After being passed by a few of the teens who ran up (with no hats and no water), I was the first grownup to reach the summit. Not that anybody was paying attention…or so I thought.

“It is no surprise that Rick was the first one up,” said our tour guide, Hillel, once we were all assembled, “because he is so competitive.”

Wow. Hillel and I had met just three days earlier. How could he have such a distorted impression of me? Or do I mean such an accurate one? What vibe do I give off that makes it so obvious that I am competitive? More important, is that a good thing or a bad thing? And what implication does this hold for people whose livelihoods involve high stakes, like presentations?

News flash: I do love to compete. I play five sports, enter tournaments in all of them, and am assigned various rankings that measure my performance relative to others and relative to myself over time. But at the risk of setting records for defensiveness, I must put this in context, lest the entire notion of competition continue to endure a bad rap.

The reason that competition has a negative connotation is because our society equates it with winning, often at all costs. We live in a competitive society, it’s dog eat dog out there, it’s kill or be killed, it’s every man for himself. Competition conjures up notions of intensity, hostility, battling with others, and an obsession with winning.

But that is not my universe; in fact, I would tell you that my experience is nearly the opposite. Competition is about discovering how to operate at peak performance. It involves creating, not intensity, but calmness. It requires, not hostility toward others, but an acceptance of one’s self. And above all, competition can’t be about winning because that hasn’t happened yet and focusing on the future messes you up. It must be about learning to live in the moment.

These are qualities and conditions that few people can achieve on their own — they require the push and the challenge of outside agents, like a steep mountain or a worthy opponent. Competition is almost entirely not about beating someone else; it is about creating a condition in which you can perform to potential. Victory might be the byproduct of that effort, but when you make it the primary focus, you risk ruining the very conditions for performance you are trying to create. As I have said many times, my second favorite outdoor activity is to compete and lose. I won’t apologize for preferring to win than to lose, but I will say with complete sincerity that I would prefer to compete and lose than not to compete at all.

This all relates profoundly to the art of presentation. Communicating in public is hard and few people are naturally good at it. Degrees in marketing and sales, English, or journalism cannot completely prepare you for success as a public speaker. In order to do that which causes fear and anxiety, you must become familiar with those feelings and how they affect you.

The goal is not to ignore nerves and anxiety; that doesn’t work. You need to make peace with the stress, embrace the idea that it is part of you, and understand how to prevail over it. Being nervous means that it matters to you and that is a good thing, not a bad thing. Channeling that energy and seeing it result in peak performance is one of the most satisfying feelings ever. That is the beauty of competition and it has about as much to do with winning as a first weekend’s box office’s receipts have to do with the true measure of a good film.

My message is not that you need to play competitive sports to become a good presenter; there are plenty of other ways to push yourself to peak performance. Instead, I am offering to you that presenting is a form of competition. It challenges and threatens you, and it tasks you to become the best version of your self. When you can face down the pressure and the fear of failure, you put yourself in a position to succeed. And the only way to make peace with that feeling is to have that feeling, in as many different environments as you can. Standing before an audience shares many similarities with standing on the 18th tee with a one-stroke lead.

I’ll close with one of my favorite quotes from one of my heroes. I heard her say it live before she used it as the title for a best-selling book. “Pressure,” said Billie Jean King in 1985, “is a privilege. Few people get to experience it and those who do should consider it a gift, not a burden.”

8 thoughts on “When Did Competition Become a Dirty Word?”