How could a simple question during a routine workshop become such a game-changer?

We were well into our day, about six hours into an all-day presentation skills workshop. My client was Micron, the well-known microchip manufacturer and largest employer in the state of Idaho, and we were in a beautiful classroom on the Boise State University campus.

And modesty aside, I was on my game. I had effectively made the case for cleaner, less-cluttered slides, impressed upon the 30+ in attendance that presentation design is not just about making pretty slides, advocated for the use of appropriate animation as a storytelling device, and geeked out with several PowerPoint techniques that they clearly had never seen before.

I did all of this while taking questions at every turn, weaving before-and-after examples of Micron slides into each topic and while modeling various principles of presentation technique. By 3:00p, this was a very good day in the making.

And then it happened. From the most innocent of questions, my world was rocked. I remember her name, too. Elizabeth did not mean to derail me; she was not trying to destroy my composure. All she did was ask a question:

“What are the two or three things you recommend we do as content creators?”

Two or three things? I had already offered two or three hundred. We were deep into the weeds of hyperlinks, actions, and triggers, and she wanted me to ascend to 30,000 feet? This question was way too general; how dare she!

No, my private indignation didn’t work; the problem had nothing to do with the question or the questioner. The problem was with me: across a seven-hour day, I somehow neglected a principle so utterly fundamental to the core discipline of presentation. Worse than my having neglected it, I wasn’t even sure that I was capable of addressing it.

“What are the two or three things you recommend we do as content creators?”

I stood before the room in literal silence for a full five seconds. At least I didn’t launch into an “um” storm, or worse, a BS session. I just stood there. “That’s an amazingly difficult question to answer,” I finally said. “Sharing a hundred tips is easy; coming up with just two or three–not so easy. What do you think? What do you all think,” I said, turning to everyone.

I had bought myself a reprieve, and in the course of the final hour, I tried to make good on my promise to Elizabeth that I would answer her question in due course. And it became a bit of a running joke that I would turn to her every five minutes or so and say, “okay, there’s another one.”

But in truth, I was busted. My foundation was shaken by the notion that I didn’t have a ready answer to this profound question. In fairness, the universe of presentations is too broad to identify two or three pieces of advice common to all, and I did tell that to Elizabeth and her co-workers. So I amended the question slightly: What are the most important things to do when embarking on a presentation project?

The final 30 minutes of the workshop became devoted to that question, and the group think dynamic was really quite eye-opening. Here is what we concluded.

Are you a writer or an outliner?

This became a fascinating sub-plot, as we came to the realization that there are two types of people in the world. And here you thought that there were thousands or even millions. No, in fact for the purposes at hand, we concluded that there are really just two: those who like to formulate their work by writing complete and fully-formed thoughts and those who like to jot and scribble ideas.

We invested about five minutes in a debate about which type was better suited for presentation projects, but that became an immediate quagmire. You simply cannot tell a long writer that he needs to start outlining any more than you could tell an outliner that she needs to start thinking in paragraphs. With apologies to every book author who has advocated for creating outlines to formulate thoughts, that is foolish advice. You either have instincts for that or you don’t and trying to fight your instincts would be so much worse than anything else you might do right, you would never recover from it.

Luckily for you, this argument is completely moot. We rendered it moot in that Boise State classroom when we concluded that it doesn’t matter. It doesn’t matter which way you like to organize your thoughts. It doesn’t matter whether you prefer outlining or writing and we in positions of passing commentary do you a disservice when we suggest otherwise.

If you are an outliner…

You will take the traditional route of jotting down ideas and finding homes for them. You will compile main thoughts, developing sub-points, and watch the progression of ideas take shape. For many people and in many instances, sentences and paragraph get in the way; they tend to clutter your brain. You’ll worry about the actual words later–right now, you just want to capture ideas. Your brain is in total free-form mode and you completely indulge it with PowerPoint’s titles and levels of bullets.

In fact, you might have to start with something even more free-form than a bullet slide. Maybe you start with a legal pad or a cocktail napkin. Go right ahead–anything that lets you free-associate around an idea is a good thing.

When you are done, you should have a set of slides that reflects your story arc.

If you are a writer…

If you are most comfortable formulating your thoughts by writing in sentence and paragraph form, then by all means go right ahead. Put your hands on your keyboard and start banging out brilliance. As a writer, I know first-hand the thrill of getting into a creative groove during the process of fully-formed composition. I can get in that zone much more easily if I allow my thoughts to become sentences. If you’re like me, don’t let anyone tell you to start with bullet points. Don’t do it! You want to open your creative canal as wide as possible, and to do that, you write. You’re a writer; that’s what you do!

Just don’t do it on the slide. Instead, open the Notes page and do it there. Write to your heart’s content. Err on the side of inclusion: when in doubt, leave it in. Take the type size down to 9pt if you have to and keep writing until you like what you have said. This is in keeping with the strategy that I shared in my Surviving Handout Hell article, in which I advocate for the use of the Notes pages for your handouts, not for your speaker notes.

Whichever thing you did first, now do the other thing. If you started by writing, now do a big copy and paste into Word or into Notepad and start paring down. What are your major points? What are the ideas that support those thoughts? Can you represent your ideas with just a few words each? If so, build slides with those words.

If you started by outlining, copy that outline to the Notes page and fill out your ideas. If you are not a comfortable writer, look to see if somebody in your organization has already written it. If so, steal it. (These are probably the paragraphs that someone has wanted you to place on your slides and you have resisted. Now you can finally tell that person that you’ll get them into PowerPoint.)

It is not so obvious what to do next, and once again, it would be irresponsible to suggest that there is but one thing to do next. Just know that you will likely need to go in both directions: you will need to hone and distill your slides and you will need to flesh out your prose. It doesn’t matter when you do which–everyone is different and everyone’s personality will influence preferred work flow. But to service your audience as best you can, you will want to ask yourself two things:

So Elizabeth, I’m ready to answer your question now. A good presentation is made up of three things: what you say, what you show, and what you give. Your quest is to make each of them as good as you possibly can. In order to do this, however, you must turn off your auto-pilot, because if left unchecked, it would take you down a dreadful spiral. That’s the spiral where you try to create some awkward mixture on your slide between the stuff you want to say and the junk you need to print. With all of that prose staring at you, you are likely to read your slides verbatim, and now those three tenets–say, show, and give–all become the same thing. 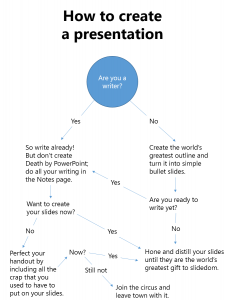 As soon as you accept the fact that you will be creating a dedicated handout, your entire life changes for the better. Now you can give the right kind of attention to those three tenets: What do I really want to say? What words and images can I show on my slides to help me tell my story? What kind of detail do I want to produce to support my story after the fact?

Those are the three things I recommend to all presentation content creators. Inspired by Wired magazine, I have embarked on my first-ever decision tree to illustrate this strategy. Be gentle…

4 thoughts on “Busted in Boise”